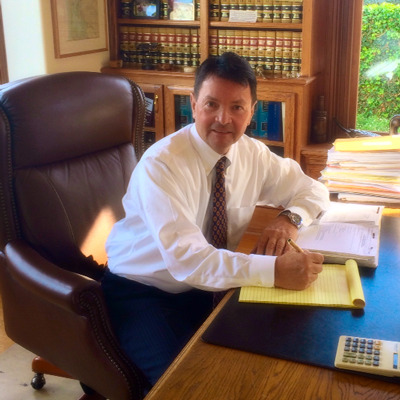 Rory A. Hanson has over 40 years experience as an attorney. He graduated from Humboldt State University in 1970 and received his Juris Doctorate from McGeorge School of Law in 1973. Rory was admitted to the practice of law in California in 1973 and certified as a Family Law Specialist in 1980 by the California State Board of Legal Specialization.  Rory is one of only four Certified Family Law Specialists throughout Humboldt, Del Norte and Trinity Counties.  Rory is currently a member of the California State Bar, Hoopa Valley Tribal Court Bar, and Humboldt County Bar Association.

Rory has maintained the Martindale Hubble AV rating (the highest peer rating) since the early 1980’s. Said rating signifies the highest level of professionalism and ethics. Rory also holds the unique distinction of being repeatedly voted the Times-Standard’s ‘Attorney of the Year’ in 2014, 2009 and 2007 and has served as Director of Eureka Vector Health Association, Easter Seals of Humboldt County, Ingomar Club, Baywood Golf and Country Club, and the Rotary Club of Southwest Eureka.

Rory has extensive experience and expertise in handling cases  involving significant assets and complicated issues. He has resolved by settlement or litigation numerous cases involving apportionment of separate and community property interests in real estate and businesses. Rory also counsels clients in the preparation of Premarital and Marital Agreements, and helps them avoid creating unintended community property interests in separate property.

Prior to joining the practice of law with her father as Hanson & Hanson in 2011, Nicole worked as a prosecutor with the Counties of Humboldt(2004-2006) and Placer (2006-2007). During her time as a prosecutor Ms. Hanson handled serious and violent felonies and misdemeanor cases for both adults and juveniles from initial charging through final disposition.  Nicole is experienced in bail hearings, preliminary hearings, Proposition 36/Drug Court, sentencing hearings, mentally disordered offenders,  court trials, and jury trials.